SEA LEVELS - PACIFIC ISLANDS
There is concern that sea level rise might threaten the existence of some small island communities.

Since the early 1990s the Australian Bureau of Meteorology has been running the Pacific Sea Level Project. The continually monitor sea level, air temperature and water temperature among other parameters. Given the motto of this site “Where numbers count” this is something of which we fully approve.

Figure 1 shows the location of the monitoring sites.

Figure 2 shows a schematic layout of a typical station.

In a recent update of our web site
“www.climatedata.info/impacts/sea-levels/pacific-islands/
... we plot the values of sea level for a twelve stations in the network. The data of these stations were summarised by the following figure 3.

Two factors are very evident. Firstly sea levels are rising: a trend line through the average of all stations gives a rate of rise of 5 mm/year. The second very noticeable feature is the way in which sea levels were influenced by the strong El Nino of 1997.

Since I since first set up the web site I have looked at the impact of climate change on rural roads in Vanuatu. This was one of the photos I took – on the island of Ambae. It shows clear signs of coastal erosion with dead tree stumps up to 50 metres out to sea. Such erosion is common on the south coast of that island and the sea was encroaching by about 3 metres every year. However given that the problem is localised to one side of the island the reason is unlikely to due to sea level rise. 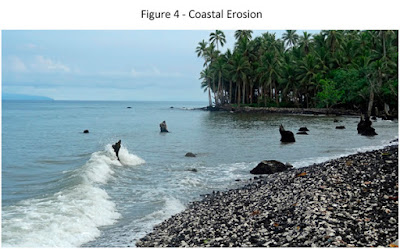 The above photo was on the south-east side of the island. This one was on the north coast. Here there is no sign of erosion – indeed vegetation seems to moving close to the sea. 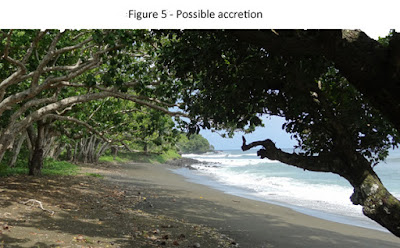 The National Geographic web site recently carried an article with the “a growing body of evidence amassed by New Zealand coastal geomorphologist Paul Kench, of the University of Auckland's School of Environment, and colleagues in Australia and Fiji, who have been studying how reef islands in the Pacific and Indian Oceans respond to rising sea levels. They found that reef islands change shape and move around in response to shifting sediments, and that many of them are growing in size, not shrinking, as sea level inches upward. The implication is that many islands—especially less developed ones with few permanent structures—may cope with rising seas well into the next century.”

Figure 6 show the equivalent of figure 3 but for sea temperature. They are plotted as variation about the mean to show trends more clearly. This plot also shows the influence of the El Nino with a drop in sea temperature. A trend line through the average sea temperature shows an increase of 0.011 C per year.

The average sea temperature for the twelve islands is given in the table below. The range is from 25.4 °C to 30.5 °C.

Figure 7 is complementary to figure 6 and shows air temperature for the 12 islands and the moving average for the mean of all twelve islands.

This shows that, as expected, islands further from the equator have larger seasonal variation in air temperature. They also show a very low rate of increase in temperature for islands; the annual rate is 0.018 C per year.