The most common definition of Scotch Mist is “A cold and penetrating mist, verging on rain.” There is however another definition: “Something that is hard to find or does not exist”. The latter is the one I am using as a basis of this post, and I’ve chosen it because I am going to look for evidence of warming in Scotland. Glasgow is in Scotland and is, of course, the venue for the COP 26 climate meeting so all the eyes of the world are on that country.

The first question to examine is “Is Scotland different to England?” The British Meteorological Office publishes long-term climate data for almost 40 climate stations covering all constituent countries of the United Kingdom. So, for a start let’s compare the long temperature records of Oxford and Stornaway Airport. Oxford is in England and almost as far form the sea as it is possible to be in that country. Its record started in 1853. Stornaway is on the Island of Lewis, to the west of Scotland, and its data go back to 1873. 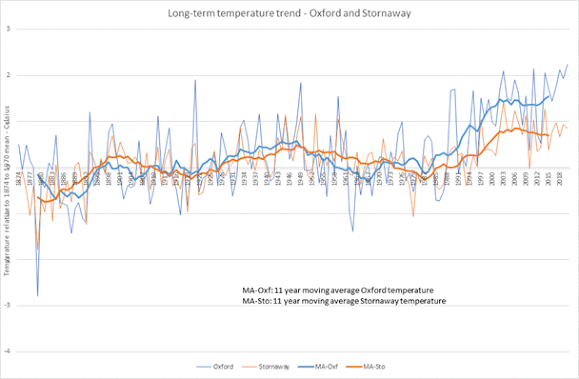 The chart shows the temperature record of the two stations from 1873, when both stations were operating, to 2020. For both stations the lines represent the difference from the mean for the period 1873 to 1970. The fine line shows the annual average temperature values for both stations and the broader line shows 11-year moving average values. Three things are immediately obvious. The first is that temperatures are, in general, rising for the whole period. Secondly, the record for Oxford shows more variation. This is to be expected as it is further from the moderating influence of the sea. The third thing it shows is that in recent years the temperature has been rising more for Oxford than for Stornaway. This is particularly noticeable for the last ten years as over that period Stornaway temperatures were stable but those for Oxford continued to rise. This third point suggests that rising temperature is, perhaps, an urban rather than a global phenomenon

A separate factor, which I discussed a few years ago on this site and will come back to in the future, is that the temperature rise is far from constant: there are even periods when the temperature is falling. This is not built into current climate models. In my earlier post I showed that this increase and fall in the rate of temperature increase was coincident with the ‘Atlantic Multidecadal Oscillation’. In the latest, 2021, IPCC report there are 37 references to that phrase, all but three of are in titles of publications. I can understand their dilemma. If they were to admit that global temperatures were influenced by a natural climate driver, and that over the last two decades this had, at least in part, led to rising temperatures, it would weaken their argument that humans were causing damaging temperature increases.

A final point related to this graph. From 1879 to 1899 the temperature at Stornaway rose by 2.49 degrees. For the same station the temperature rose by 2.48 degrees from 1979 to 2003. This suggests that the rate of increase of temperature in recent decades is not unusual.

Whilst the above chart and the data on temperature rise in different periods are indicative, using just one climate station for the northern part of Britain is, of course, insufficient to prove anything.

The Met Office website has data for 9 Scottish weather stations. Six of these are land based and three, including Stornaway, are in islands. 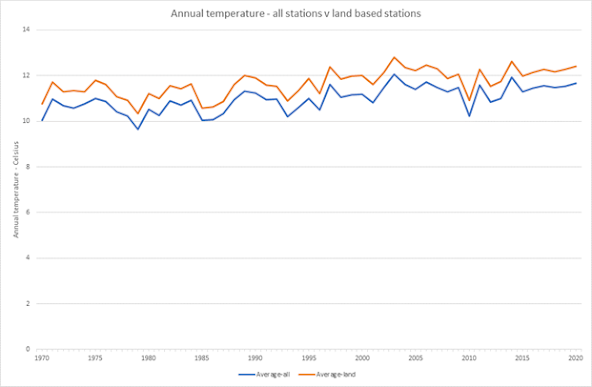 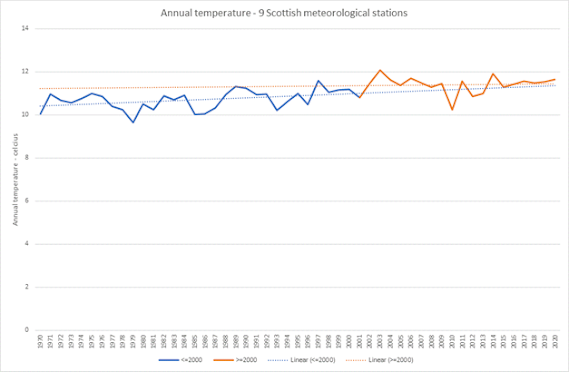 The final chart in this posting shows the annual temperature trend averaged over all 9 met stations for two periods. The lines are in blue, from 1970 to the year 2000, and orange, from 2000 to 2020. The dotted lines show the trend in temperature over time. The trend line for the last 20 years shows that there has been no sensible increase in temperature in Scotland.

So, the proof of global warning, at least as it effects the venue of the latest COP, is indeed “Something that is hard to find or does not exist”. I am, of course, fully aware that what happens in a small country surrounded on three sides by the sea is not representative of the whole world. Nevertheless, the fact that the data represent stasis can be considered a "canary in the mine".