What goes up must come down (maybe)

By climatedata - October 28, 2021
Generally speaking, as far as the earth’s water is concerned what goes up (evaporation) must come down (rainfall). One of the major tenets of the climate change community is that with global warming this might no longer be true: that with increasing temperatures more water will be held in the atmosphere. To quantify this requires accurate measure of the variables involved. I have in an earlier post looked at the decline in temperature measurement (a major determinant in what goes up). This post looks at rainfall where the situation is worse.

First let me note that measuring rainfall has one important difference from measuring temperature. Rainfall is much more variable than temperature both temporarily and spatially. A significant depth of rain can fall in a few minutes. Most places on earth can sometimes go for days with no rain. Similarly, it can rain heavily on one side of town and a few kilometres away there be no rain at all. Getting an accurate estimate of rainfall over a given area requires a number of raingauges.

The few major data bases of rainfall have stopped updating.  The most recent update of one major rainfall data base is “GHCN Version 2 Precipitation Version 2”. The main file with data, V2.PRCP, is dated 8 November 2019. The equivalent for temperature is now up to version 4 and is updated on a regular basis.

The following chart shows the number of stations with data included in the rainfall data base. I have counted the numbers with at least one month of data in each year. 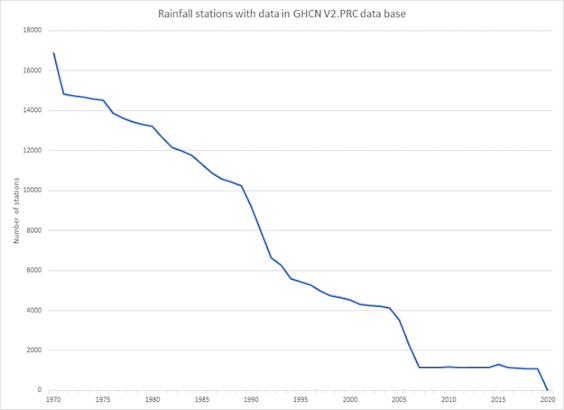 The data base included some stations with data going back over a hundred years. Out of the total of 234 stations which have appeared in the data base, only 19 had stopped reporting by 1970. Before the data base ceased updating in 2019 this had increased to 96 sites with no new rainfall measurements.

Another major rainfall data base is produced by the Climatic Research Unit of the University of Norwich in the UK. The following chart shows the number of rainguages in their data base at 10 year intervals since 1900. 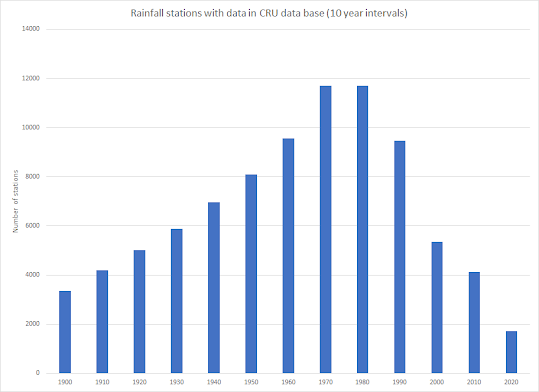 As can be seen the number of stations in their data base has also fallen dramatically since 1970 – but at least they are still trying.

Rain has not stopped falling so how does the climate change industry manage to report on rainfall. They complement raingauge data with satellite-based estimates. 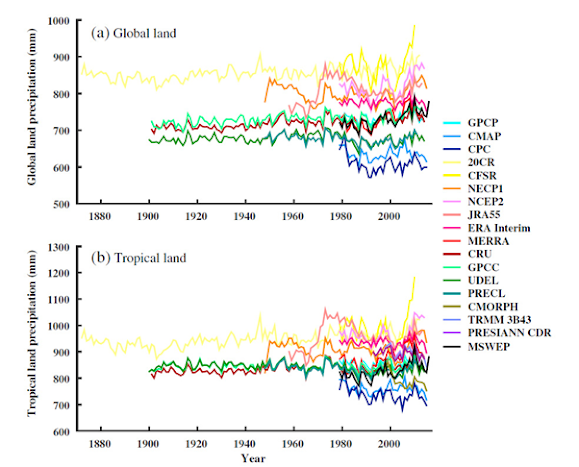 In short, we have no way of knowing how much rain is falling on a global basis. As I said in my introduction, the impact of climate change will be more severe if evaporation increases relative to rainfall. Is it? Nobody seems to know and, as long as they are doing nothing, nobody seems to care.