ARCHER AND RAHMSTORF: THE CLIMATE CRISIS - AN INTRODUCTORY GUIDE TO CLIMATE CHANGE

By Climate Data Information - March 06, 2010
“I feel that it is important to not let bad, politically motivated science stand unchallenged.“ This is a quote we could all agree with and is part of the motivation behind our site. Only too often both ‘deniers’ and ‘warmists’ select a sub-set of the available science and then push it beyond reasonable limits to further their cause. Our mission is to sort out the justifiable from the bogus.

The authors of this book are, to use the current term, ‘warmists’. Their book is based largely on the IPCC 2007 assessment report which both of them contributed to. To their credit the authors have managed to avoid some of the recent brick-bats thrown at the IPCC. They do not repeat the scientifically dubious claims regarding Himalayan glaciers, African agriculture or the Amazonian rain forest. What is more they found no space in their book for any reference to Dr Pachauri, Chairman of the IPCC, whose commercialisation of the IPCC in the interest of organisations he is associated with has attracted much opprobrium. That said, there is a lot of politically motivated science in their book.

One of the most egregious examples of trying to gull the gullible is in their figure 3.1, reproduced below: 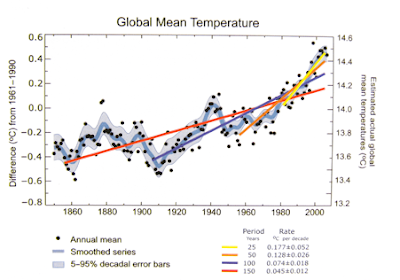 This purports to show that the linear trend of temperature increase is accelerating but is completely spurious for two reasons. Firstly, given that temperatures have been both rising and falling, there will always be short periods when the rate of rise is higher than the long-term average. Secondly, the 25-year rate of rise around the period 1910 to 1945 is almost the same as the 25-year period they show at the end of the record. The authors repeat their claim in the chapter summary: “Measurements unequivocally show that we are in are in the midst of an accelerating global warming”. They are wrong: there is no evidence that the rate of temperature increase is accelerating. [Postscript. The authors attribute this figure to the IPCC TAR4 Summary for Policy Makers figure 3, which does have a plot of temperatures, and I assumed they had added the rate of temperature rise. In fact the figure comes directly from the IPCC Technical Summary figure 6. So, I apologise to the authors for trying to hoodwink the public; they themselves had been hoodwinked by the IPCC.]

The authors do something similar with sea level rise. They state (correctly) that the rate of rise over the 20th century estimated from tide gauges averaged 1.7 mm/year. They also state that, in 2003 when the IPCC report was prepared, satellites had been showing a rate of increase since 1993 of 3.4 mm/year (also correct). They conclude that this indicates ‘the sea level rise has accelerated in recent decades.’ What they do not tell us, though Rahmstorf as a Professor of the Physics of the Oceans must have known, is that the rate of level rise has fluctuated and a rate of 3.4 mm/year was not unknown in the past. What they also should also have known, since their book was published in 2010, is that for the last few years the rate of rise estimated by the satellites has hovered around the long term rate of 1.7 mm/year. Again the facts show their science is politically motivated.

The book is well produced with colour photos and graphs. The use of colour seems sometimes to be at the expense of the science. The statement “in many parts of the world, the fraction of the total annual rainfall that comes down on just a few very wet ways has increased” refers to figure 3.6. Rather than a graph supporting this assertion we get a photo of bus driving through about 20 cm of water. Another example of a disconnect between the text and the cited figure relates to tropical cyclones. They quote the IPCC report as saying there is “no trend in the total number [of tropical cyclones] that occur each year” then show a graph of Tropical Cyclone counts. This graph incidentally has 4 lines, only 3 of which are referenced in the key. In relation to hurricanes the other claim they make, that ‘trends since the 1970s [are] towards more intense and longer-lasting cyclones’, may be true but ignores the fact the estimates of cyclone energy since 1851 show periods of rising energy, 1860 to 1890 and 1920 to 1950, similar to that from 1970 to 2005. The Energy Index for 2009 was actually below the average in the 1970s. The authors could not, of course have known that particular fact at the time of writing, but quoting short-term trends as evidence of long-term climate change carries the risk that a reversal of the short-term trend appears to invalidate the argument. I use the word “appears” advisably; in reality short-term trends in a system with as many “random jitters” (their phrase) as our climate say next to nothing either away about long-term changes.

One might expect the author of the quote at the head of my review to applaud my efforts to debunk politically motivated science. It won’t happen. The quote is from an email sent by Stefan Rahmstorf himself.