By Climate Data Information - June 11, 2012
On 16 May 2012 we posted on temperatures in the Yamal peninsula. This is one of the sites much discussed for its influence on temperature reconstructions. In the earlier post we looked at measured temperature data from two stations. This time we have looked at a group of stations in and around the peninsula as shown in the following map. The data were from the station files used by the CRU for their CRUT3 temperature series. 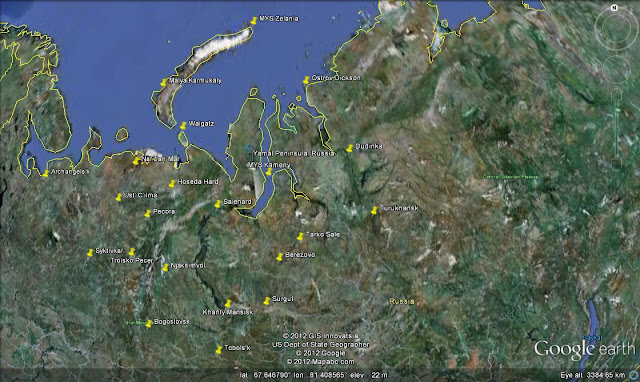 We used the data from these station to cross-infill all of them. Two of them started before 1820 and eight others started in the 19th century. The method examined each pair of stations separately for each calendar month, calculated the correlation between them, then infilled missing data using whichever station had the best correlation and which had not itself been infilled.
As examples of the infilling we give below sample charts for 5 stations near to the peninsula: Salehard, MYS Kamennyj, Berezovo, Hoseda-Hard and Ostrov-Dikson. The most interesting chart we present is the last which is the estimated temperature for the Yamal peninsula based in the weighted average temperature of 6 stations in or near to the peninsula. This shows that the temperature has risen at about 0.56 °C per century but there is no sign of a sharp, 'hockey-stick' like upturn.